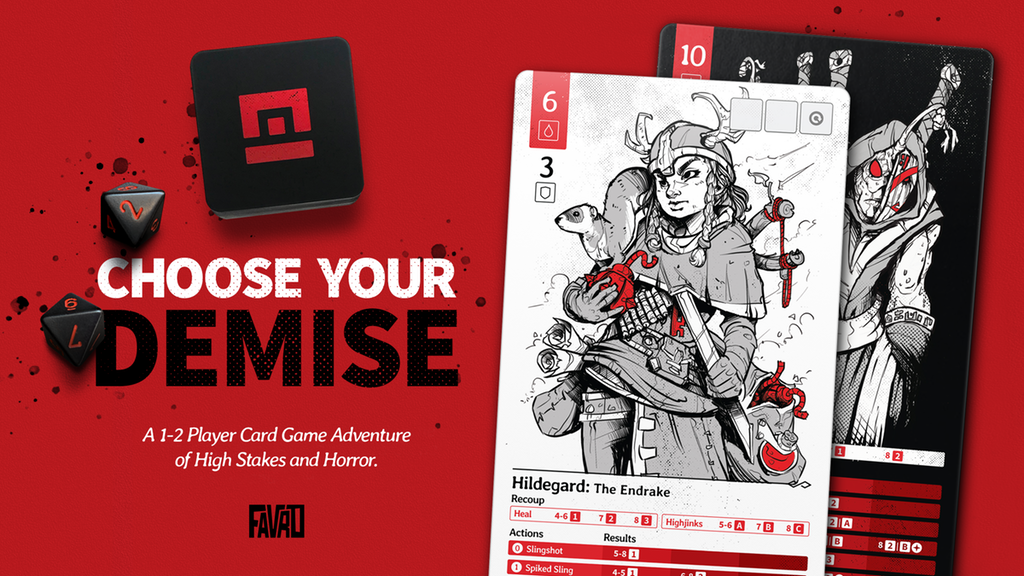 Latest Updates from Our Project:

First off, I hope everyone is healthy and safe!

I have the full prototype here and I thought I would show you some pics! I am very happy with how it's turned out so far. There are some final changes that need to be made, but for the most part, it's looking pretty good. Please note that the Action Cards will have the matching rounded corners of the big story cards and there is room in the box for sleeves.

That's it for now. Enjoy!

I handed off all the production-ready files on April 6th. It’s out, it’s in the hands of others, finally.

Make a game he said, it will be easy he said…what was I thinking…

My earliest files from this game clock in on May 26th, 2017. Good lord. At the time it was called Soot and Cinders. It had some different visual beats, but the general premise and gameplay were the same. The logo looked more like something out of a brewery and the card backs had an occult thing going on. Before this, I had designed a logo for Solemn Oath Brewery and realized after the fact the game logo looked just like it. So much so, that I called (the owner) and asked him if it looked too much like that logo. He was fine with it, but after that call, I realized if I had to ask maybe I should let this one go. Eventually, I settled on the name Spire’s End and took the game on a different path. I added a bit of retro 70s/80s to the logo. It’s got a bit of the Zardoz key art in there, that kinda vibe- some classic 80s rock, but intentionally flat design. I made a hard rule from day one to avoid any skeuomorph stuff. Not a bad thing for this genre, just not for this game.

A look at it's humble beginnings from the cutting room floor (action cards and logo). Kinda cool, but not for this.

From there it was all about finding the artist. I got the first illustration from Ben when I was at a kids' birthday party sitting on a park bench. I freaked out when I saw Millicent. The moment I saw her, I knew this was it. I emailed Ben back immediately and said let's do this. I continued to bug the hell out of him for years.

Fast forward 1057 days later…(which is way too many days, that’s with a day job to boot) the final prototype is en route at this moment. Below is a pic I got from the manufacturer during the prototype production.


I hope the time, pain and love show. I have had many sleepless nights wrestling with this thing. I remember getting up at 4 am in a panic saying The Eye Encounter isn’t right. I forced to play it right then until it made sense. The game is in a great place now. It feels good and plays well. I am proud of how it’s grown and what it’s become.

I would love to show some more art, but I really want it to show up as you play, plus you can make out some new stuff on the print above. Here's a slice of one in there...

Alright, so where are we at today? Backerkit surveys will be locked down and shipping/add-ons will be charged next Friday, April 24th. There will be a final 48-hour email warning from backerkit, then that will be it. There are still some unanswered surveys. Please check your junk mail if you've never seen a survey invite. I sent out another backerkit survey email to those that have not responded.

Next up is prototype approval, then mass production begins!

As always thanks again for all the support. We are still on time — July. Now that things have been passed off though, the world is a nutty place and delays can occur. If things change I will let you know.

I hope everyone is safe and healthy during these crazy times. In terms of Spire’s End, I hope this can be a welcome distraction for all of you. For me, the game's development has been incredibly helpful in keeping me positive and focused. I have all of you to thank for that.

As I mentioned in the February update the dice and action card files have been turned over to the manufacturer.

I have a prototype of the full game, looks and plays great! In case you missed it, I posted this pic (on Instagram) of the game deck next to a brick for a size comparison. It's big! Please note that this is not a production sample.

There are only 4-5 illustrations left to complete. Once that is done (this week or next) testing/editing will continue until April 6th when I will hopefully turn over all the files.

A fun thing I was able to include in the game is an alternate enemy card that wasn't planned. This was something on my wishlist that I squeezed in. If certain conditions are met during Chapter 2's encounter you will replace the enemy card with another one. The fight conditions change a bit, but I think the real fun of it is seeing the same character midway through the fight. I hope you like him (he's the angry Under-Dweller at the top).

Due to the situation in the states and around the world I thought it would be best to postpone the shipping/add-on charges until next month. April 24th will be the new date. If you would prefer to be charged now instead (I've had some requests), you can do so by messaging Backerkit customer support.

Again, thanks to everyone for your support during these tense times.

Thanks to James at Vorpal Board and Steve Ireland (Backer #1) for some great game testing sessions!

The open play-testing will have to be postponed. Sorry for any inconvenience. I am also looking into some alternatives to do some additional testing with backers. I will let you know if I can sort that out.

The good news is a physical demo of the all the cards is being produced currently (minus the illustrations for chapter 6) I will take a few pics of it when it arrives. Looking forward to that.

I will keep you posted.

It’s been a productive month. The Manufacturer and Fulfillment Center are locked it.

The production files for the Action Cards and Custom Dice have already been sent out! The main editing passes on the story deck and rule deck has been completed. They are not locked in yet, tinkering will probably take place until final delivery.

I am finalizing the box artwork now that I have templates. Which reminds me! It looks like the box will be big enough….drum roll, to fit the sleeved cards and all the games components.

There is still a considerable amount of illustrations left to do. The goal date for those to be completed is March 31st, then all production files to be delivered by April 5th. We are currently on track!

Backerkit charges for Add-ons and Shipping (which I don’t anticipate will change) will occur on March 27th.

On February 29th I will be hanging out with our game editor (Christian) at his taproom to play Spire’s End. I probably will not have the actual demo in time for this session. We will be most likely be using iPads. I will be there at noon. I am happy to stay until whenever.

Some of you (locals) have reached out. If you have any more questions message me. I aim to have another meet up on the 7th or 14th of March. My plan is to have the actual full prototype minus some art for Chapter 6 at that time.

I think that’s it for now! I look forward to hanging out if you can come!

Oh, quick note- "No Such Luck" is the title for card 80. Just in case you were wondering...